Both rides will depart at 9:00 AM from Belgrade’s Lewis and Clark Park.  Look for the Fire Station on East Main Street and turn on Davis Street to get to the park.

The Tour de Spud is the same iconic route that we’ve been riding for years, but we changed the route to make it counter-clockwise now. You ride Dry Creek to Manhattan first, cross the tracks and head for the Interstate (where you see the gas station on the right in case you need more coffee or a pit stop). Continue toward Churchill but make a right onto Stagecoach just before the road makes a sharp left. The next left turn will direct you toward the cute little town of Amsterdam. In other years we regrouped at the store but it is closed now so we continue on to the town of Churchill. Continue out of Churchill and ride the rolling hills to the Norris Highway. Time spent on the Norris Highway is relatively short as River Road arrives soon (just past the golf course) on the left. Cruising down River Road toward Belgrade has just enough slope so one can really pick up the speed! Our cue sheet takes you right on Cameron Bridge Road and left onto the Jackrabbit Lane bike path (after you cross Jackrabbit at the stop light) When the path turns into sidewalk by Stockman Bank you can ride on the wide shoulder over I-90. Take a right on Jefferson Avenue by McDonald’s, then turn left on Oregon Street, cross the railroad tracks and see the the Lewis & Clark park where you started next to the Town Pump. The ride about 47 miles.

The Tour de Tater Tot offers a couple of nice shortcuts. You can duplicate the longer route going out Dry Creek Road but turn left when the road out of Manhattan going toward Churchill makes a sharp left (don’t go to Amsterdam). Turn left immediately after leaving Churchill (the first left) where the road goes up a short hill–Cameron Bridge Road. The route is the same after this point as the longer route and is about 34 miles–and is a great ride for beginners since it skips the steeper hills around Amsterdam as well as the hills before the Norris Highway.

Please print out the cue sheets if unfamiliar with the route or contact   Jason  599-2897,  belgradebobcat@msn.com
To speed things up at registration, join GBVC online at the top of the home page.

Also, you can meet us at Bar 3 BBQ restaurant (right by the Park) after the ride for lunch and beer. 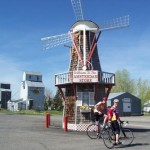 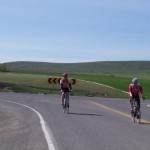